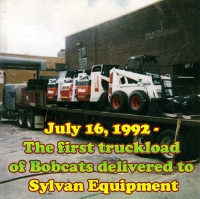 History:  Sylvan Equipment Corporation was founded in a suburb of New York City, by Sylvan Greenbaum in the early 1930’s. For many years the company rented small construction equipment consisting primarily of pumps and air compressors. The rental business increased substantially in the 50’s and 60’s under the management of Buddy Wolman.

By 1970, Sylvan was one of the largest rental houses on the USA’s Eastern seaboard, supplying air compressors, generators and welding machines to the construction and marine industries. On September 30, 1980, Elliot and Lynn Prigozen purchased the company, following the passing of Sylvan Greenbaum and his wife Bertha.

With a new management team, Sylvan Equipment Corporation expanded its lines of equipment to include aerial work platforms, resulting in a period of steady growth.
In 1985 Sylvan opened its first branch in New Jersey, followed by a further expansion to Newburgh, New York in 1989. Sylvan became the “Bobcat” dealer for the New York City area in 1992. Since then, Bobcat has expanded with new branches in Westbury and Holtsville, Long Island.

The company continued to grow and quickly evolved to become Bobcat of New York – with five locations in the New York City area. In 2008 a branch was opened in London, England — making Bobcat of New York an international company. We are committed to the service we provide!

Bobcat of London has a very helpful staff, a pleasure to deal with. Far surpass any other machine dealer I have dealt with can't recommend enough.

Sales team is excellent very knowledgeable, all around the team is fantastic!